A new report highlights that investments are driving Earth perilously close to tipping points in the Amazon rainforest, on the great ice sheets, coral reefs and the Atlantic circulation. Financial institutions that mediate these investments play a central part our ability to shift economies in a direction that promotes a thriving planet for all. 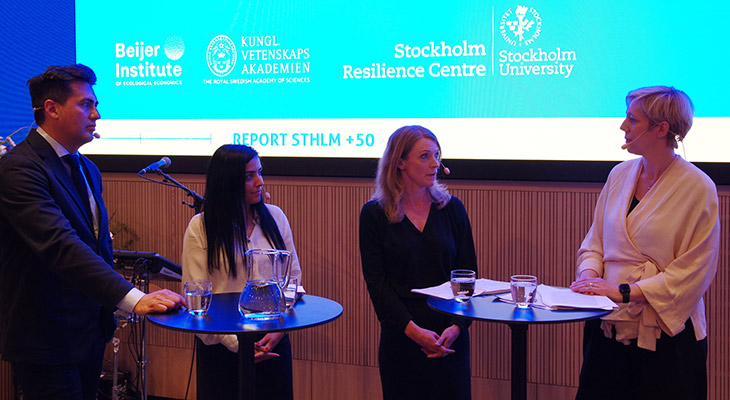 “The world’s largest investors are crowd-funding a dangerous climate future,” said Victor Galaz, programme director at the Beijer Institute and deputy director of Stockholm Resilinece Centre. He is lead author of a the report Economy and Finance for a Just Future on a Thriving Planet, which was commissioned by the Swedish Ministry of Environment as an independent contribution to Stockholm+50 and launched at the Royal Swedish Academy of Sciences 1 June.

The report highlights the role of sleeping financial giants. These are investors who play a significant role in stabilising crucial tipping elements such as the Amazon rainforest. If pushed too far, they can destabilise earth’s climate and exacerbate global warming.

“It is possible to redirect capital and change economic indicators to enhance the resilience of the planet, and reduce risk of crossing dangerous tipping points,” says co-lead author David Collste, Stockholm Resilience Centre, and at the launch he pointed to the need for new indicators for human well-being, macroeconomic performance and financial risks.

The report lists what needs to be included:
• Indicators for human well-being must acknowledge the underlying structures of pressures leading to the transgression of planetary boundaries and the resulting effects on well-being for current and future generations.
• Macroeconomic performance indicators must include the uncertainty in the dynamics of a living biosphere.
• Financial actors must recognise a wider set of planetary changes; develop impact accounting as a core part of capital allocation decisions; and support the open disclosure of environmental, social and corporate governance (ESG) data and criteria.

The report also calls on governments and financial institutions to more forcefully phaseout subsidies and investments to activities that are pushing ecosystems towards tipping points.

Several Beijer Institute researchers contributed to the report, including Therese Lindahl and Caroline Schill who underlined the importance of social norms.
”Norm changes have the capacity to instigate large-scale behavioural change for sustainability”, they claim.