The academic science sessions “Our Planet, Our Future – Global Sustainability” continued on the 28 April with two panels, a discussion of the call for action, and a set of closing remarks.

Panel on technological and social innovations

Below are some selected remarks and quotes from the panellists:

Sir Richard Roberts, Nobel Laureate, New England BioLabs said:
“We have seen two tremendous advances since the Covid-19 crisis began driven by biotechnology [rapid development of tests and mRNA vaccines]. Despite this we should figure out a much better way of getting ground-breaking biotechnology into the hands of the public.”

Jennifer Doudna, Nobel Laureate, University of California, gave a brief introduction to the Nobel Prize-awarded CRISPR/Cas9 genetic scissor and discussed three ways it is already having an impact, including its potential importance for developing new crop varieties that could address challenges facing agriculture, in particular in light of climate change.

Karen Seto, Yale University, and a member of the Beijer Institute board, stressed the importance of addressing urbanisation and focused on how satellite imagery and analysis technologies can help cities become more sustainable, healthy and equitable.
In particular she mentioned NASA’s Black Marble images of Earth at night as something transforming our understanding of human activity and giving new insights to things like vulnerable populations.

Frank Geels, University of Manchester, argued that innovations are happening but they are not diffusing at sufficient speed. He stressed that we should not only drive the emergence of technological breakthroughs, but also their diffusion, only then can they lead to transformations.

The enabling conditions for transformations

Professor Rosina Bierbaum of University of Maryland moderated the second panel dialogue on governance, inclusiveness and stewardship. She started by framing the theme of the panel as something social science calls “the enabling conditions for transformations”. 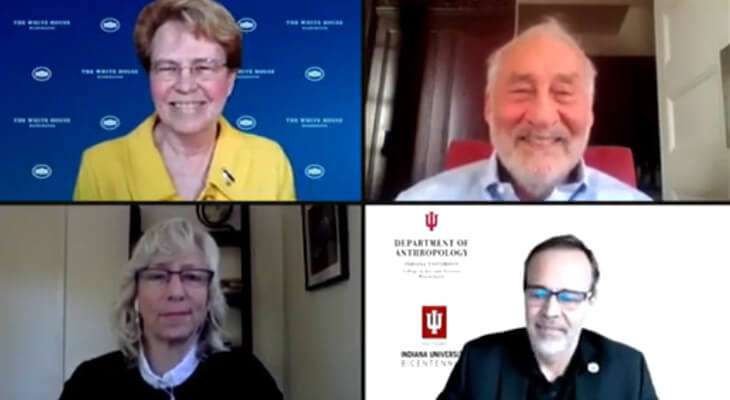 Joe Stiglitz, Nobel Laureate, Columbia University, argued that the concept of “social cost of carbon” should be closer to $100 per ton by 2030 than the $50 per ton recently estimated by Biden administration. Although it’s measures were far better than the previous administration’s, he said, it was far to low, because the best available models were not used. They didn’t fully incorporate risk nor did they value future generations enough.

“Politicians often talk about the burden of debt we might leave our children, but those debts are dwarfed by the inequities we will leave them with a destroyed planet”, Stiglitz emphasised.

Jane Lubchenco, Advisor to the President, Oregon State University, spoke about the need to both protect nature and manage wisely outside protected areas for sustainable use, stressing that quality, or level of protection, matters. Furthermore, Beijer Fellow Lubchenco highlighted the importance of using incentives and social norms to scale up action, not least following the Covid-pandemic.

“We dare not squander this opportunity”, she said.

Another Beijer Fellow and former board member, Gretchen Daily, Stanford University, talked about natural capital, valuation of ecosystem services and the need to ramp up public-private partnerships to invest in nature-based solutions.

She propagated for the new metric, Gross Ecosystem Product (GEP), defined as the total value of final ecosystem goods and services supplied to human well-being in a region annually and experimentally being applied in countries like China and Colombia.

“Those suffering the most have contributed the least,” he said. “We cant get transformation without putting indigenous people on the forefront and including them in the conversation.”

He emphasised three aspects that needs to be present for biosphere stewardship to be successful: recognition, empathy and cooperation.

The leaders for the hosting organisations ended by giving their reflections of the Nobel Prize Summit.

Vidar Helgesen, executive director of the Nobel Foundation, draw the conclusion that: “Science and innovation are outpacing political decisionmaking.”

Marcia McNutt, President, US National Academy of Sciences reached out to the audience:
”This summit can be a great platform to communicate not only politicians but to everyone one the globe that we have a big problem, but we also have some amazing solutions”, she said, and added “but we need your support.”

Johan Rockström, Potsdam Institute for Climate Impact Research said: “There has been some really deep insights coming out from this summit, and perhaps the most profound one that we need to reboot our relationship with planet Earth.”

And finally, Carl Folke, Beijer Institute director and chair of the board for Stockholm Resilience Centre, was optimistic about how different disciplines of science had come together:

“It is fascinating to have such different inpoints, but reaching the same conclusion. It is a breakthrough that we don’t argue about the grand challenges any longer, we agree that a transformation is needed.”