The third generation Beijer Young Scholars (BYS3) came together for the first time in May 2019, for a week-long workshop at the Royal Swedish Academy of Sciences in Stockholm and the island of Ekskäret in the Stockholm Archipelago. 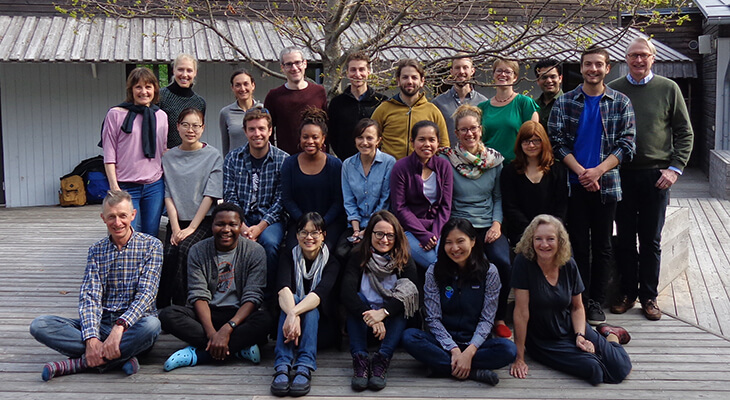 The 20 early-career researchers invited to join the BYS3 network were nominated by Beijer Board members and Beijer Fellows. Group members have a variety of academic backgrounds, including economics, ecology and political science. The group is also geographically diverse, as its young researchers come from Europe, Africa, Asia and the Americas. This diversity is fitting given the topic chosen for the first meeting: Globalisation and the Biosphere, a deliberately broad topic that sparked both exciting discussions and daunting confusion.

As in previous years, the workshop was supported by senior researchers. On this occasion, Carl Folke and Anne-Sophie Crépin were joined by Neil Adger (University of Exeter), Lisen Schultz and Maria Tengö (Stockholm Resilience Centre). Christina Leijonhufvud and Agneta Sundin organised and facilitated the workshop.

The first day was intended to provide participants with an understanding of each other’s research focus and approach. This was enriched with input by the senior researchers on the practice of interdisciplinary research. Importantly, the group also took the time to openly share their expectations about the network. This is illustrative of the strong emphasis that was placed on process facilitation and how to navigate and harness the diversity of the group.
On the following days the workshop became more dynamic, alternating between plenary sessions and discussions in smaller groups. This interplay was useful to maintain a balance between creativity and progress. The facilities in Ekskäret provided an ideal setting for these activities, with indoor and outdoor meeting spaces and recreation facilities, all gracefully designed to blend into the landscape.

Among the topics of interest that emerged from these discussions there were some expected issues, such as cross-scale dynamics and the global flows of people, capital, commodities and information. There were also a few surprising topics, such an idea to write an undergraduate sustainability science textbook or to explore the potential of the ‘science-entertainment interface’.

As the workshop approached its end, some of the research and non-research ideas became more concrete, and the BYS3 group also agreed on a strategy to continue working together until next year’s meeting.
The closing session was a candid and heartfelt round of personal reflections on this first BYS3 meeting. Some of the comments from participants:

“I learned the value of patience. I had to stop and listen, as we might be using the same words but not communicating in the same way”

“Meeting economists was a big eye-opener, and that makes me want to engage more”

“We are doing different things but there is a similar goal, and this can foster more creativity and the sense of importance of your work”.

Overall, the third generation of Beijer Young Scholars showed great respect for each other’s views and ideas and an enthusiastic drive for interdisciplinary sustainability science, in the spirit of the Beijer Institute.